You have run out of free articles. You can support our newsroom by joining at our lowest rate!
Already a subscriber?
Log in or Activate your account.
Loading
No thanks, return to homepage.
×

An image of the proposed riverfront band shell, which for now carries the working title  “The Glass Armadillo.” 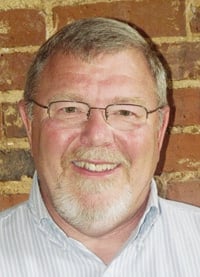 MUSCATINE, Iowa — 1986 Muscatine High School graduate Matthew Gordy is helping to make a mark on his hometown even while teaching at Iowa State University.

And what better way to make a mark on a city that built its legacy on clamshells than with another shell.

But this time, music will take center stage, not the mollusk, in a band shell that could house bands and entertainment offerings.

The working title for the planned  project, owing to its clear bowed covering and metal trusses: The Glass Armadillo.

“Maybe we should call it The Pearl Mollusk,” Gordy said with a laugh.

The server encountered an internal error and was unable to complete your request. Either the server is overloaded or there is an error in the application.

The project includes additional cost — for ongoing maintenance and upkeep, as well as landscaping.

Gordy said he was visiting the Bankhead home last Thanksgiving when he first learned of the band shell idea. Bankhead had completed drawings, but no site plan.

Twenty minutes later, Gordy had sketched one out, and Bankhead asked him to join the volunteer design team. “I was honored,” Gordy said.

According to Gordy, if it’s funded, the band shell will be built near the basketball courts at Riverside Park on ground that’s about six feet higher than rest of the lawn nearby.

The server encountered an internal error and was unable to complete your request. Either the server is overloaded or there is an error in the application.

The band shell will face southwest, allowing the audience to view the performers with the Norbert F. Beckey Bridge in the background — which of course would be lighted during evening performances.

The 45-degree bend in the river affords people a 260-degree river view at Riverside Park. It would give people “an incredible tapestry of sunrises and sunsets,” Gordy said, the latter of which former Muscatine resident Mark Twain celebrated in prose.

The nearby bluffs would enhance the project’s visual appeal, he said, as would two rows of sycamore and other trees to be planted on each side near the band shell in order to provide event-goers and performers shade on hot summer days.

The band shell could host a variety of events, including farmers markets, dances, plays, concerts — even movie nights.

As it’s designed, the project will include four oversized light poles that could hold speakers and other sound equipment, as well as serving as anchors for, say, a tent to house a wedding party.

The project is designed to be scalable, Gordy said, so it could accommodate small groups to crowds of up to 15,000.

Plans call for a series of steps for seating to be constructed in front of the band shell, and Gordy has an idea where he might find some of the construction materials, should they still exist: at the bottom of the Mississippi River.

On Monday, Gordy wondered out loud whatever happened to the limestone piers that once held up the Old High Bridge.

“I’d love to get my hands on the Cedar Valley limestone,” he said.

Next steps, he said, include seeking donations — not only for the construction, but for ongoing maintenance and upkeep. “There’s nothing more disheartening,” he said, “than to have an unused and unloved public facility.”

He said that organizers also plan to look for ways for the band shell to fit in within the city’s expanding trail system.

Downtown Muscatine already boasts several nods to its pearl past. There’s the Mississippi Harvest statue on the riverfront, the Muscatine History and Industry Center’s displays, even businesses — such as Pearl Plaza, The Pearl bar and lounge, and Pearl City Iowa Realty, among others — inspired by the city’s legacy.

“This is putting one more pearl on the line,” Gordy said. “Keep pushing, Muscatine, to make the community known as a regional force for art and culture.”

Get local news delivered to your inbox!

Related to this story

Watch now: Pelicans on the Mississippi River on Sunday, Mother's Day, in Davenport

Watch now: Pelicans on the Mississippi River on Sunday, Mother's Day, in Davenport

Watch now: Barb Ickes was live as the keystone was put in place the Iowa-bound arch of the new I-74 bridge

Watch now: Barb Ickes was live as the keystone was put in place the Iowa-bound arch of the new I-74 bridge

An image of the proposed riverfront band shell, which for now carries the working title  “The Glass Armadillo.”

Get up-to-the-minute news sent straight to your device.